Voted 5-Stars by the
Preschool Crowd, Who Now
know the Differences Between
Turtles and Tortoises.

There are many differences between tortoises and turtles, and the wise tortoise who narrates this book tells us about ten of those differences–in rhyme. 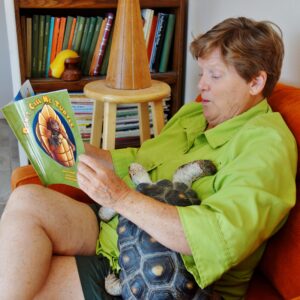 Myrtle, Elaine’s red-foot tortoise grew so exasperated by being called a ‘turtle’ that she asked Elaine to write her story. Here they are together, with Elaine reading the book to Myrtle shortly after it was published.

A Review of Don’t Call Me Turtle! By Helen Woodhams
Arizona Daily Star:

“To the casual observer, turtles and tortoises appear to share so many similarities that we often use the names “turtle” and “tortoise” interchangeably. But the fact is that they couldn’t be more different, says Elaine Powers, whose charming picture book employs clever rhymes and colorful illustrations to demonstrate why the two should never be confused.

To begin with, while some turtles were built to paddle around in the water, she says, tortoises were not – throw a tortoise in the water, and he’ll drown. And that’s just the beginning of her lesson about these special — and very distinctive — reptiles, a lesson sure to fascinate junior naturalists and animal lovers.”

Do you know the differences between
the land-dwelling Hickatee and the
ocean-dwelling Sea Turtle?
Learn about them inside.

Learn all about the endemic Hickatee turtle who has so many troubles–well-meaning humans who throw them to their deaths into the ocean, cars that run over them, loss of land to lay their eggs, and cousins pushing them out.

Shows physical traits and the differences between these land-dwelling turtles and the sea turtles that do reside in the ocean.

Make friends with the Hickatee today!

You can find out more about which cookies we are using or switch them off in settings.